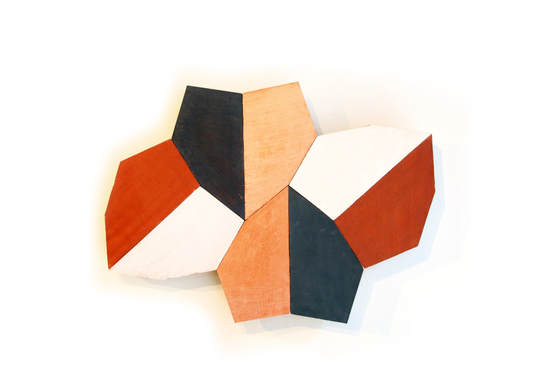 ​In the summer 1969 issue of the Applied Physics Lab (APL) digest, Richard B Kershner wrote:
“One of the oldest problems in Euclidian geometry is the problem of delineating those shapes that are suitable for tiles or paving stones in the sense that replication of the given figure can fit together to cover a flat area without gaps or overlapping. Although the problem is deceptively simple to state, it has proved remarkably refractory. The author has succeeded in carrying through a complete determination in the special case of convex polygons.” Kershner then goes on to explain, as he puts it, “ a few critical proofs” for his findings.

There are a very limited number of ways that we have found how to tile a pentagon, and Kershner developed the math to solve for a number of these. In 1969, Kershner (who taught at the Johns Hopkins Applied Physics lab, just outside Baltimore) thought that he had found the complete set of ways that a pentagon can tile (the above motif is one of these-- type 7, specifically). Although Kershner wasn’t correct (more pentagonal tilings were found a few years later), the problem remains a challenge to solve. The most recent pentagonal tiling was developed in 2015, and that brings us up to 15 found ways to tile a pentagon.

I am interested in questions that won’t go away, that remain a challenge. How to tile a pentagon presents itself as a simple enough question, but it also persists. In that sense, this tiling is an emblem of that kind of question and returns to the conceptual frame Kershner made in his text in the APL digest- a reference to ancient Greek tilemaking- these tiles are coated in Terra Sigillata, a material used by Romans to make their clay impervious to water. Kershner was an important part of the faculty at the Hopkins APL, which basically serves as a technical resource for the department of defense. Kershner worked in missile research, and helped develop some of the first GPS systems, and surfaces to air missiles used by the US navy. It makes the story more problematic but poses an interesting interweaving of the areas of knowledge that we might have once thought of as disparate.