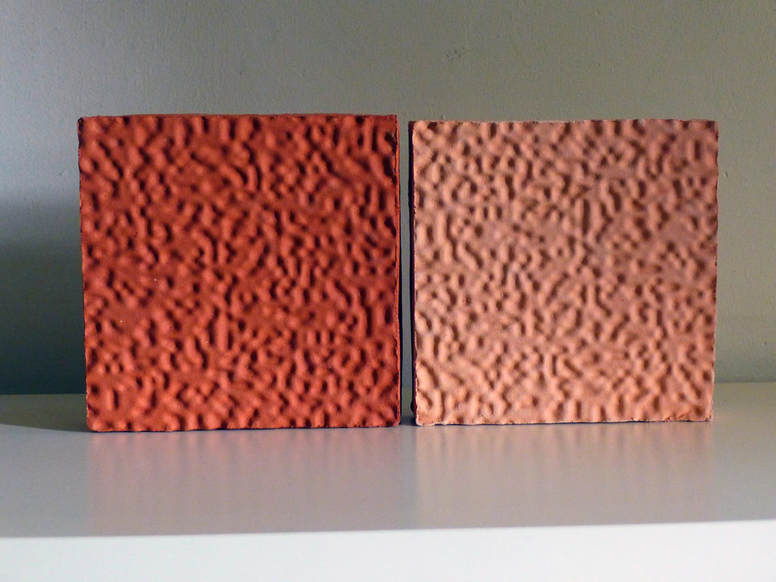 The pattern on these tiles was made by photographing the base of the Carlton Bookcase by designer Ettore Sottsass (the vermiculated block at the base) and blurring the photograph. The resulting blurred image was then converted to a heightmap and used to direct the milling of the relief on this tile.

Sottsass also worked in ceramics, but the Carlton shelf is built of wood and plastic laminates…no ceramics (except for this masonry reference). Vermiculation is a mode of rustication, and Sottsass uses it in a typical architectural manner when he puts it at the base of the Bookcase; just as it is used in architecture, it gives the base visual weight.

Vermiculation is a motif I’m using as an emblem of craft-- I'm thinking of craft work as a mode of rustication in everyday life that, similarly, gives our life conceptual weight in meaning and purpose. In his Carlton bookshelf, Sottsass uses vermiculation in a way that acknowledges the craft of stone-carving. In this tile, Sottsass's reference is returned to ‘stone’ (or almost).  The blur is used to distort but is also emblematic of digital processes. Blur functions in digital imaging software are largely reliant on a Gaussian function to generate the blur effect. The Gaussian function basically blends each pixel’s color with the neighboring pixels, along a Gaussian (bell curve) function defined by the user. In the above tiles, the blur is both used as a visual effect, to soften the carving and generate a smoothened heightmap, but also to connote an aesthetic of the digital.